Sucralose is prepared from sucrose by chlorination, and its chemical structure formula is shown in Fig. 3-1.

Generally, it is a white powder product that crushes the large crystalline particles of sucralose into fine particles. Its sweetness is about 600 times that of 5% sucrose solution. The sweetness is pure, and its sweetness is very similar to that of sucrose. There is no aftertaste.

3-2 Solubility of sucralose in water and ethanol

As shown in Figure 3-2, the solubility of sucralose in water is very low, and it is almost insoluble in corn oil. In the multiphase material system with oil or fat using emulsifier, sucralose will enter the aqueous phase, which is similar to sucrose. 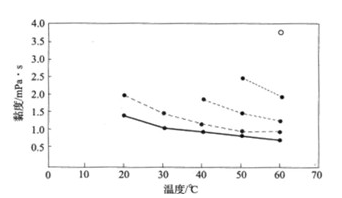